Black butter recipe. I was sent some Jersey Black Butter to make a recipe with. To be honest, when they first sent the email, I sent back “Yes I love Jersey butter, especially the one with salt crystals in.”
– To which I was sent an explanatory reply of what exactly Jersey Black Butter is…that is to say Jersey Black Butter is “peeled and cored apples are cooked down with black treacle, liquorice, cider, brown sugar and spices. This is then cooked slowly over an open gas flame, stirring continuously for several hours.”

I was a bit sceptical about the liquorice element, it’s not really for me and even though I could smell it in the jar, when I made the buns it wasn’t obvious at all. I scoured the internet for recipes, but nothing much came up apart from the ones on Jersey Black Butter’s site. But I wanted to do something different and so I racked my brain. And I came to thinking about the cinnamon flavours in it and thought that I could substitute the cinnamon paste for the jersey black butter. I’d also been wanting to make cinnamon buns for ages and thought this was a great time to do it!

I’m really pleased how they turned out and of course, I had to add my own little changes too. I added a sprinkle of white chocolate chips instead of raisins or sultanas, and swapped out cream cheese frosting with a salted caramel drizzle and slivered almonds. The recipe seems to use a heck of a lot of yeast; the recipe called for fresh, but I substituted the dry equivalent (which is 50% of the weight) but it still had a very yeasty taste – not that I mind!

Ok, so now for the recipe…first we’re going to make a dough and leave it to rise for an hour. Making it in a mixer is best – I did start by hand and ended up putting in the mixer which achieved the silky texture that was described.

Roll out the dough…

Carefully roll up the dough 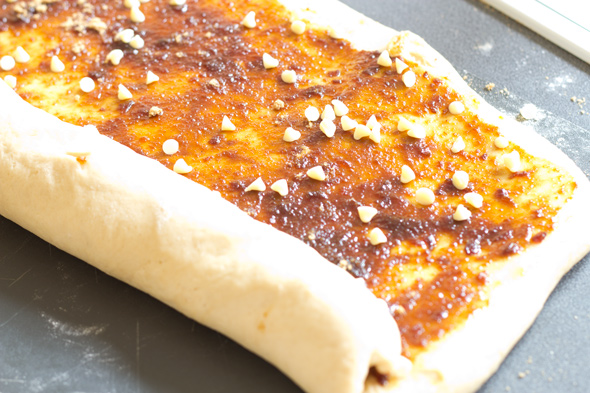 Once it’s rolled up, we start slicing…

Place the sliced dough onto a greased tray

Sprinkle with slivered almonds and bake for 15 minutes

Once removed from the oven, make a quick salted caramel sauce and drizzle over the buns while still warm.

Recipe adapted from Leila Lindholm’s “A piece of cake”

FOR THE FILLING AND TOPPING