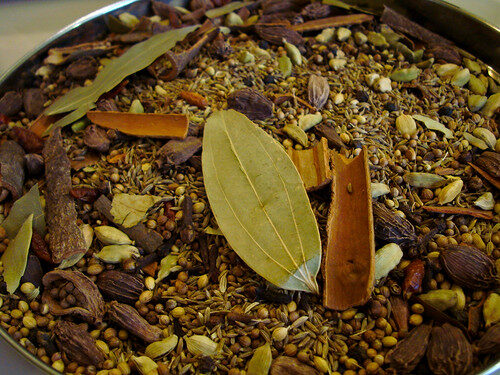 I’m still feeling pleasantly full from a wonderful Indian lunch, prepared by Manju Malhi and her mother at a two hour cookery workshop held at Books for Cooks in Noting Hill, London. It’s the second workshop I’ve attended there this year (the first was Kimiko Barber’s Japanese Kitchen), and now I feel really inspired to recreate all the dishes! I don’t cook much at all, so once in a while, I need workshops like these to get me back into the kitchen…

Manju, who learned her cooking skills from her mother, has simplified Indian dishes, mostly by reducing the number of spices used. Being vegetarian, my husband loves experimenting with dal and curries, so luckily we have most of the spices that Manju used, but I’m still a bit clueless about them.

Many years ago, I spent much time in my best friend’s mother’s kitchen, watching her prepare meals for us – chappatis, dal, vegetarian curries, raita etc. And she would always make mine slightly less hot. Of course I didn’t write any recipes down, silly me! Watching Manju and her mother interacting in the kitchen brought back many fond memories of those meals.

Manju’s top five spices that she uses most regularly are cumin, coriander seeds, garam masala (mixture of ‘hot’ or ‘warm’ spices), turmeric and chilli powder. She recommends buying from Rajah , Natco or Seasoned Pioneers, and it’s better to buy spices in smaller quantities, although ground spices can be stored for 6 months if kept away from heat or sunlight, while unground spices can last for a year. Manju’s mother makes her own garam masala, which is then ground with a coffee grinder (clean thoroughly afterwards, by grinding grains of rice).

And we were introduced to asafoetida, also known as ‘devil’s dung’, because it’s very pungent. It’s made from the resin of a plant native to Iran, and is used as a substitute for onions and garlic, which followers of Jainism do not eat. It also aids digestion.

We were shown how to ‘temper’ or dry-roast unground spices in a frying pan (with no oil), to release their aroma and make them edible. When you can smell the spice, it’s ready. After cooling down, it can be ground to a fine powder using a pestle and mortar.

When preparing a curry at home, it’s easier to make it spicier at a later stage, rather than try to make it milder by adding whipped joghurt, milk or cream. Onions, tomatoes, garlic and ginger form the basis of many North Indian curries. And when you see the oil in a curry float to the top of the saucepan, this means the curry is ready to be served. Curries also taste better the next day…

Tip from Manju – if you’re served a hot curry in a restaurant, rather than ordering a lager or water, choose a dairy-based drink instead, such as lassi, in order to neutralise the acidity in the chillis. When I’ve bitten into a chilli by mistake, eating spoonfuls of joghurt with cucumber has always helped (I learned this from my friend’s mother).

You may also be interested in supporting VSO’s Big Curry Night, which takes place on Saturday October 25th. The idea is to make a curry (or curries!) and invite your friends and family to eat them. Their donations will all go to charity. Manju has supplied some great recipes to get everyone started, which you can find on the VSO website.

The Easy Indian cookery book looks really useful, and even comes with a CD of traditional Indian music that Manju says will get cooks into the right mood! I’ll be posting about the Easy Indian recipes over the next week…